This new DVD from Thunderbean Animation features rare behind the scenes films, produced to show the process of animation and motion picture production. These shorts offer a wonderful glimpse into the golden era of animation.

Animated Cartoons: The Toy that Grew Up- 1948- a 20 minute short showing the origins of animated toys through the 1800s and into motion pictures.

How Animated Cartoons are Made. Rare 1920 film featuring animator Wallace Carlson, produced by the Bray Studio.

Old Chinese Proverb: A Picture is Worth 1,000 words-excerpt of Jerry Fairbanks Studio production in the early 40’s, including animation

How Motion Pictures are Made- Bell and Howell tour through the production of films, including a Terrytoons animator

Otto Mesmer at the Douglas Leigh Sign Company- Rare Footage of Messmer at work in the late 50’s or early 60’s.

RKO Newsreel, 1937- Shows tricks of the trade for fake ‘Mediums’, as well as footage of the Disney Studio producing Snow White

Be the first to review “Makin’ ‘Em Move: Rare behind the scenes footage of vintage animation studios” Cancel reply 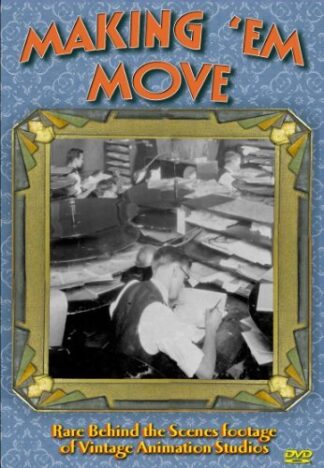