Snappy Video presents a fun collection of ‘Soundies’. This short music films were produced from 1940 through 1946 by various companies, and released by the Soundies Corporation in 16mm for use in both muscial ‘Panoram’ jukeboxes as well as non-theatrical rentals. Film continued to be produced after the Soundies Corporation ceased distribution for use in the Panoram machines. This collection features 24 musical shorts from the era, with many well-known stars, all scanned from original 16mm prints.

What a Difference a Day Makes- Jerry Stewart with Ceci Eames
At your Service
Ted Lewis: The Sunny Side of the Street, Me and My Shadow,
Three Blind Mice, Isn’t She Pretty, I’m the Leader of the Band
St. Louis Blues- Jerry Grey and his Orchestra
Pass the Biscuits Mirandy-Spike Jones
El Rancho Grande -Barry Wood
My Reverie – Larry Clinton
Why a Girl Loves a Sailor – Jonny Long and his Orchestra featuring Paul Harmon and Helen Young
Shine -Louis Armstrong (with Nicodemus)
Thanks for the Boogie Ride -Gene Krupa
Ain’t Misbehaving- Fats Waller
Minnie the Moocher- Cab Calloway
Who’s Gonna Shoe My Pretty Feet?
Daddy- Bobby Troup
Full Moon- June Valli
Crying My Heart Out Over You- Rose Marie
Roll Out the Barrel (incomplete) Frank Yankovic
My Gal Salome
Can Can Capers Pepepedo 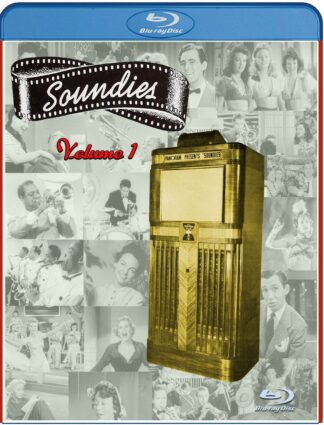